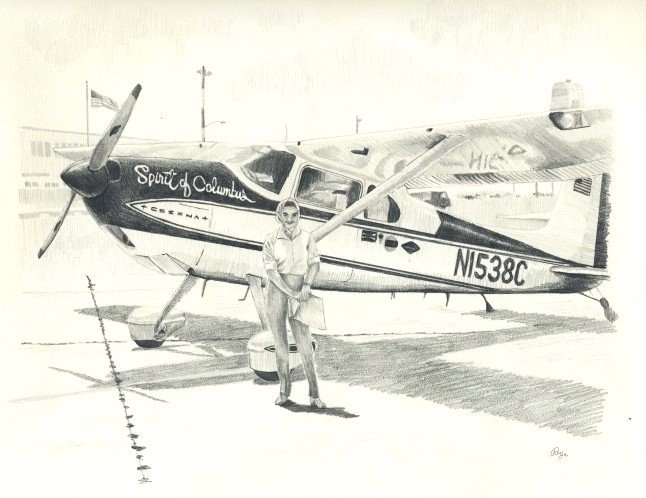 A short time ago, I was featured in a short blurb in Aviation for Women magazine publicizing my custom drawings of airplanes. One of the responses I received from this mention was an email asking if I’d be willing to contribute somehow to help out a new WAI chapter. Named Spirit of Columbus after Geraldine “Jerrie” Mock’s airplane, this chapter needed to raise funds for its charter and its mission of spreading the word about Jerrie Mock. I’m all for supporting women in aviation, so I told her I was in!

So who is Jerrie Mock? She is the first woman to fly solo around the world. She did so in 1964, becoming a true pioneer for women in aviation at a time when aviation was still very much considered a man’s world.

My drawing was based on Jerrie’s favorite photo of herself in front of her plane, wearing pants (as she preferred), and was raffled off during an unveiling of a statue honoring her in Columbus, Ohio. I’m happy to report that enough money was raised from my drawing and other item sales for the chapter charter! The winner of the drawing will display it where she works at NetJets. I’m happy that in a small way I was able to help this chapter spread the word about Mock’s amazing achievement and inspire more women to reach for the skies!

From the WAI blog:

Funds are now being raised through the Columbus Foundation to place a sculpture at Port Columbus International Airport where Mock flew in and out in 1964. Learn about upcoming event, contribute to the sculpture fund, or purchase Jerrie’s book at www.38Charlie.com.

Read more about the event at the WAI Connect Blog: Statue Unveiled Honoring Jerrie Mock, First Woman to Fly Solo Around the World.